Mappae Solis: Copses of the Halflings

Monocultures are rare on Earth, and usually occur due to some form of extremism or isolation. Humans do not have a single authority or culture, but it is a common failing of much speculative fiction to assume that other races do. This often ties in with the idea of “single-biome planets”, worlds of only ice, or forest, or ocean.

Places might be hotter or drier than Earth, but they should still have variance. Cultures might have species-based traits and similarities, but they should be varied. In this next series of Mappae Solis posts, I will try to give an impression of different species’ cultures, especially given the broken and varied worlds they live in. Don't take any of this as immutable canon, as strange and bizarre subcultures are to be expected.

The Copses of the Halflings

The massive forests of the halflings are not united. Although they share common ideas and views, each Copse is a separate entity, aligned but not always allied with the others.

Copses are not group-minds either. They simply speak a lot faster than most visitors. Each Copse has a different internal structure, but these differences are organisational. From the outside, one looks very much like the other. The difference comes from both their aims and methods, and the way each treeling relates to its neighbours. 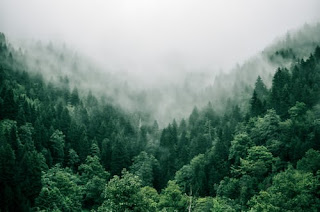 There's a roof above the fog.

The shared goal of all halflings and all Copses appears to be the preservation and collection of other lifeforms. Whether remnant code imperatives or shared mutation, each halfling has this drive, in much the same way humans have drives to procreate or seek social company. The halflings themselves do not truly understand this, though they wouldn’t let that show. Each Copse has an explanation, taught to their quickling children and spread by their halflings juveniles, and each Copse organises itself accordingly. While some Copses may be very similar, each stands unique in its views, though some are branches of older Copses.

The key way this drive manifests is through the groves. Each Copse maintains a variety of internal gardens, farms, or entire biomes. Some are small nooks of arranged plants, others are entire valleys, their sky a greenhouse of living treelings grown massive for just this purpose. 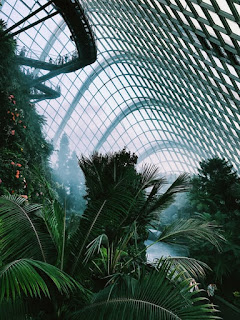 Some do accept visitors.

Copses can be broken into two main attributes: governing style and philosophy. Being immobile near-immortal gossips, these both take slightly different forms than are familiar. Military coups are hard to do when you can’t move, but quicklings have been known to wage proxy wars, if rarely.

Type of governance (roll d6 if you want):

As an example, 6:2 gives us Communal Cultivators, a Copse that might be similar to a farming collective. Any leadership would only be given a short reprieve from working alongside the others, and the idea of work might be held as essential for well-being. Close community and social bonds would be common, and very little that does not serve the group would be present. Compassion is prevalent, and trade with other races would be common, as the Copse could only use a small portion of their organic produce. The Copse might also undertake charitable endeavours, sending relief supplies to famine-stricken villages. After all, work is what is important, and it is best when it serves. 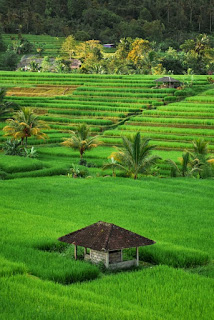 Is there anything as beautiful as an ordered field ready for harvest?
at October 04, 2020